One spoke at a time- How I’m gonna’ spend my golden years. 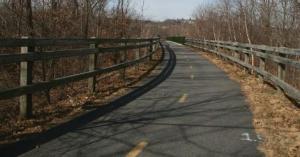 I can hardly believe it’s only been 10 years but I guess a 7/10th of a mile section of land getting approval for construction once the designs get finished and it goes out for bid, the bid is accepted and the contract is signed and final approval is granted is pretty good.  It’s only a matter of time before I can go to WalMart, Sam’s Club and Providence.  Talk about making running my errands easier.  I guess I’ll have to stay in Worcester another decade or so.

Bikers and hikers who have been looking forward to the construction of the 48-mile Blackstone River Bikeway, which would connect Worcester’s Union Station to Providence, R.I., via a path following the Blackstone River, have had a long wait. Originally proposed nearly 10 years ago as a joint project between Massachusetts and Rhode Island, cyclists on this side of the state border have seen work on the project start and stop in fits, jealously looking on as Rhode Island has gotten off to a quicker start in completing its half.