From Running Late to Just Plain Running- Oh Sh*t! The train is moving!

So I needed a few days to collect my thoughts and decide exactly how to approach this CarFree event in my life.  It seems best to avoid building it up any more and just tell the story.

It was Thursday night and the end of a long day.  I had spent the evening celebrating 2012 with TaskRabbit at Space with a Soul in Boston.  There was plenty of great Harpoon available and I took full advantage.  I knew the last train was at 1020 and even after watching the clock like a hawk that is four IPA’s deep, surprise surprise, I would be cutting it a little close.  It would have been close but comfortable but I decided that I needed to make it more interesting. 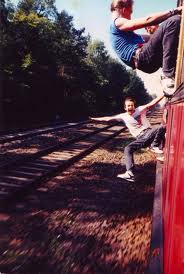 As tends to happen when the schedule gets crazy and I’m peddling all over Worcester, catching trains and sitting through classes, I forgot to eat lunch/diner and my stomach made it clear that this had to be resolved before sitting on a train for 90 minutes again.  This is one of those very seldom situations when McDonald’s is the best option so I locked up a 10 piece nuggets and fries and briskly walked to my train.

Then it got interesting.  It turns out that they only open the farthest cars on the last train out, so my boarding point was as far away as it could possibly be and I started to get nervous.  I kept my brisk pace up and was on the verge of a jog when something just didn’t seem right.  The only thing moving was the platform or it was the only thing NOT MOVING.  The train was starting to roll!

It was “Fight or Flight” time and I was getting on the goddamn train, so it was full sprint time.  As I hit full speed, I could hear someone yelling behind me just as I saw an open door about a full car length ahead of me.  I had made my decision get on the train or run off the end of the platform trying!  It was close, but got to even with the open door and made the jump.  I landed and realized all at once a few important things:

I had jumped on to an empty car with dark and empty cars on either side.

The conductors on the train were gonna’ be really pissed.

As it happens, I got SUPER LUCKY.  Two of the conductors wanted to throw me off but the third had seen me a number of times, knew I really just wanted to get home and reasoned with them that “it’s the last train of the night and this dude lives all the way in Worcester”.  As long as I promised to “never do that again” and stood there while the other two took turns yelling at me, I was allowed to stay.

I wish I knew who that conductor was and when I see him again, I’m gonna’ give him a mental hug that will manifest itself as a knowing head nod when he punches my ticket!