This weekend I was preparing for an annual tradition, the pumpkin carving party.  Sure it’s only the 2nd time we’ve done it but you gotta’ start somewhere.  One of the most important items on the list is always a solid selection of seasonal/pumpkin beers to really get everyone into the spirit of things.  After that you just throw down some painters plastic, bust out the knives and it’ s a party! 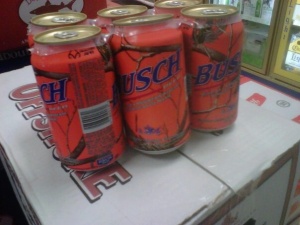 It only makes sense that I go to my local liquor store for such provisions and there just so happens to be a great store right up Shrewsbury St, which I ride past at least twice a day, that is my go to for all things beer and liquor.  Needless to say, I’ve stopped in on more than a few occasions over the course of the past year but this time was very different.  This trip was great not just because I found Busch Hunters Camo cans but because I was recognized as CarFreeBrad in public for the first time.

A lovely young woman named Sandy was ringing us up at the counter, gave me a slightly strange but knowing look then proclaimed, “I knew I knew you”.  Apparently, she saw the article in Worcester Magazine a few weeks back and recognized me as “one of hers”(meaning one of her customers).  We had a great little conversation about biking, her

commute to work and her own struggle with it because she has a bike, walks all the time but just can’t make the transition to biking to work.  It was a fun exchange, and Sandy, don’t feel bad about not biking to work, the fact that you are thinking about it is all I could ever ask for.  I guarantee in a month or so I’ll be chugging past the store in a snowstorm rethinking my decision.

The moral of the story is that CarFreeBrad has people.  I don’t mean that I have fans or legions of die-hard activists for CarFree living nor do I really want that.   But anyone that reads the blog, sees an article or just looks at me sideways on Main st then pauses for a few fleeting moments to think about taking their bike out for a spin, carpooling, or taking the train to work is in the club and I consider you one of “the people”.  It’s not a hard club to join and we accept all comers.  So go ahead, pause for just a second right now and think about the last time you took your bike, walked or took the train to get somewhere and consider doing it again sometime and you’re in the club!

2 Responses to CarFreeBrad Has People! Join the Club Today.